Review: Only Human + The Themis Files Series by Sylvain Neuvel

I was first introduced to Sleeping Giants, I was on the Illuminae hype train (still riding it – have you read Obsidio yet?). Sleeping Giants has been compared to Illuminae, with it’s full cast audiobook, alternative storytelling, and crazy space ride. Little did I know just how much I would come to love this series. Check out my thoughts now that Only Human is here and the trilogy is complete! 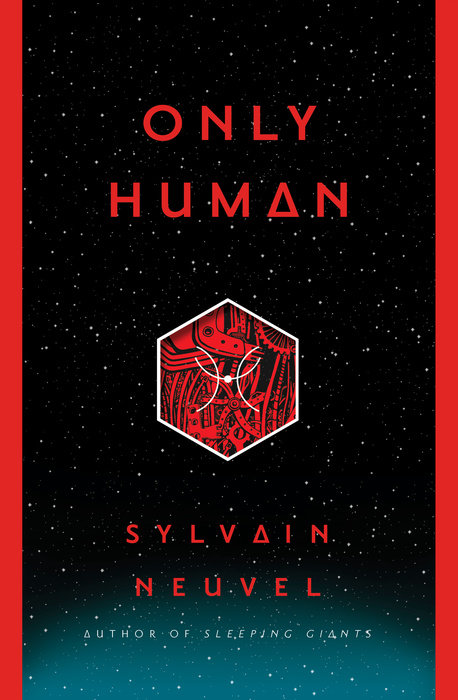 Pacific Rim meets The Martian in the explosive follow-up to Sleeping Giants(“One of the most promising series kickoffs in recent memory.”—NPR) and Waking Gods (“Pure, unadulterated literary escapism.”—Kirkus Reviews).

Brilliant scientist Rose Franklin has devoted her adult life to solving the mystery she accidentally stumbled upon as a child: a huge metal hand buried beneath the ground outside Deadwood, South Dakota. The discovery set in motion a cataclysmic chain of events with geopolitical ramifications. Rose and the Earth Defense Corps raced to master the enigmatic technology, as giant robots suddenly descended on Earth’s most populous cities, killing one hundred million people in the process. Though Rose and her team were able to fend off the attack, their victory was short-lived. The mysterious invaders retreated, disappearing from the shattered planet . . . but they took the scientist and her crew with them.

Now, after nearly ten years on another world, Rose returns to find a devastating new war—this time between humans. America and Russia are locked in combat, fighting to fill the power vacuum left behind after the invasion. Families are torn apart, friends become bitter enemies, and countries collapse in the wake of the battling superpowers. It appears the aliens left behind their titanic death machines so humankind will obliterate itself. Rose is determined to find a solution, whatever it takes. But will she become a pawn in a doomsday game no one can win?

Sometimes I think about what brought me to a series and it’s usually a trusted friend, an author I’ve already loved, or some serious good convincing. For The Themis Files series, I can’t remember why I started reading these books (was it the gorgeous covers??) but I am glad I did.

Only Human, the final book in the series, just released and I immediately grabbed the audio. The Themis Files are told in a style that looks familiar to those of us who have read Illuminae, which is especially rich in the full cast audiobooks. Without being too spoilery, here are five reasons why I love this series:

1. Mystery that unfolds quickly enough to not get bored but slowly enough to keep you wanting more. I took Waking Gods on a run and there’s no better motivator to keep running than a book you can’t stop listening to.

2. Characters you become very attached to. With any good sci-fi story, it’s likely that not all of your favorite characters make it to the end. That is especially true here. You will miss them greatly.

3. The middle book is the best one! I know, weird, right? I am historically a middle book lover but I’ve been disappointed many times recently. Waking Gods is my favorite of the series!

4. The covers. Oh, the covers. Have you SEEN the covers, especially naked? If my copy of Sleeping Giants wasn’t signed, I’d trade in my paperback for a hardcovers.

5. You might never look at your neighbors or your cousin or anyone the same again. Just leaving it at that.

To sum it up – if you’re a fan of Illuminae and looking for a great audiobook or piece of eye candy that features stellar characters and a mystery you won’t soon forever, The Themis Files are for you!

Review: How to Be Remy Cameron by Julian Winters

Review: The Crow Rider (The Storm Crow #2) by Kalyn Josephson

One response to “Review: Only Human + The Themis Files Series by Sylvain Neuvel”